Teaching kids safety around the water includes teaching them to look for and expect adult supervision at pools, beaches, etc. as well as teaching them expected behaviors. None of us is a perfect grown up, but when we collectively model “pool manners,” our children pick up on it.

Lifeguards have a big job keeping an eye on every swimmer. Feel free to kindly remind kids near you of universal pool rules. It keeps the space safer for everybody. 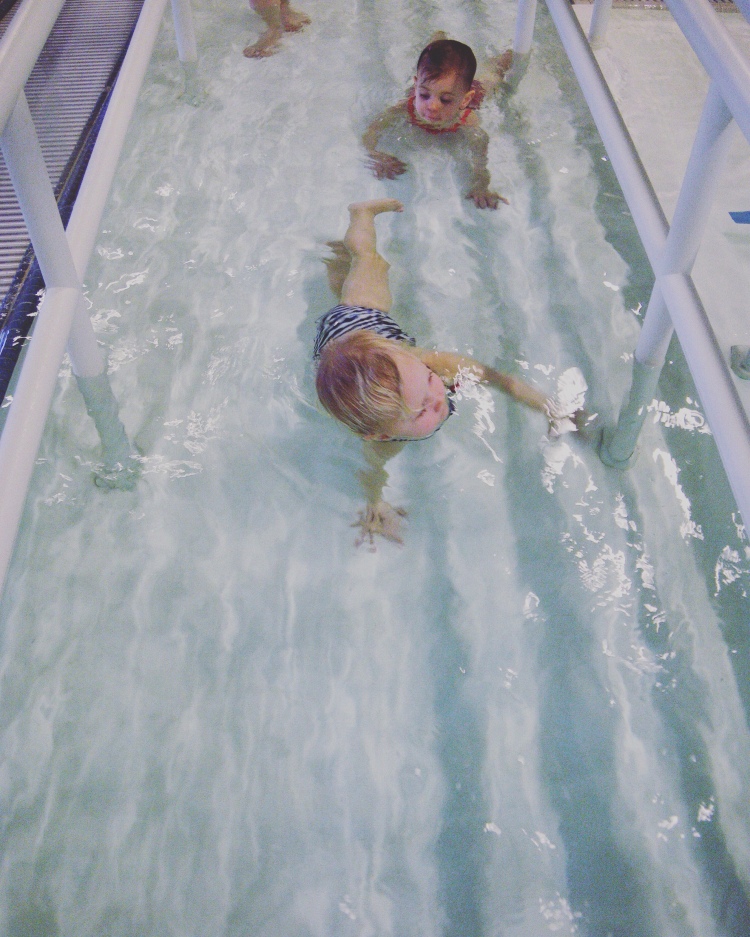 Responsive Adult Supervision
Playing in the water is a little different from playing on land because of the inherent risk. Follow your kids, and stay within arms’ reach of non-swimmers. Train your eyes to continue watching them, even when you’re conversing with others.

Interactions between kids might require some coaching of both appropriate pool and social behaviors. Especially when emotions run high, prepare to do a little behavior coaching.

Behavior coaching teaches kids appropriate actions and responses to others in a social setting. There are tons of ways teachers and parents can coach their kids expected behaviors, but for the purpose of today’s post, I’m focusing on “drive-by” moments… when something happens between kids and you only have a few seconds to respond. In these moments, the goal is not to punish or penalize, but to teach children expectations.

Behavior coaching is like any other kind of coaching – noticing something to correct and calling out directions into the action as it rapidly unfolds before you. The more you practice it, the better you become at finding the right words to respond quickly.

Responsive adult supervision is necessary for all scenarios when little ones are swimming, and especially when visiting a busy watering hole.

Boots on the Playground
“Bustling” isn’t usually my first thought when I think of going to the pool… but I added an experience to my repertoire recently. Our visit to a bustling water playground last weekend reminded me of a carnival: loud, boisterous; lightly-supervised children; a hubbub of energy and chaos.

A bathtub-sized bucket randomly dumped gushing water from its perch in the sky onto unsuspecting waders. Including me. Three times in a row to be exact. Kids pointed the nozzles of spouting spigots over the masses. Several times, toddlers stacked up like pancakes as they slid down a pair of short water slides. I thought a post was pertinent. At the very least, I can review it to prepare myself for the next time (if there is one.)

As I stood knee-deep in water in the middle of a crowd of parents and babies, I noticed two things: my tunnel vision for my kid, and the tunnel vision other parents had for their kids. No appearance of organization. Sure, plenty of adults hovered over their small children, but it was hard to see anything coming at you in the foray… like the large 8ish-year-old boy who pummeled his way through our toddlers’ circle of “Ring Around the Rosie.” My inner teacher rustled herself out of hibernation after that.

I felt annoyed at the kid at first. He was at least four times the size of our little babies, he barreled through their circle of innocent fun and busted open their hand holding. He should’ve known better. The toddlers handled it well, but us moms fumed for a hot second.

When my inner teacher popped up on my shoulder, though, she reminded me to presume positive intent. It’s easy to think of strangers as nasty brutes when feeling put out, but when your role in a community is to treat all children respectfully and fairly, it’s good to have a mindset that people generally want to behave appropriately. It’s human nature to want to fit in with societal norms by doing “the right thing.” And without knowing the kid, how can I assume someone has taught him to behave better?

Since all the kids were virtually unharmed, I took a moment to reframe my thoughts with empathy and an open heart toward the big boy. There’s no doubt he had something on his mind. Maybe he forgot his size, or wanted to find his parents or his friend, or needed to get to the restroom. Whatever his motivation, it inhibited his decision-making; his impulse risked the safety of smaller children, which isn’t okay.

Everyone is worthy of safety from harm. This boy was either under the influence of a stressed brain and not capable of making good choices because of it, or he was careless or impulsive. He needed a quick dose of parenting.

Directing an effective behavior coaching message calls for simplicity. I said, “Watch out for the little kids.” It was enough to turn his head to look at us, and in that statement, I implied the appropriate behavior and the expectation that bigger kids can impact smaller ones. He heard me, and that was the primary goal. An apology would have been nice, but that would be expecting a lot from a child we didn’t know.

A secondary effect of speaking up is that it models looking out for one another, especially to those most affected by an intrusion.

Talk the Talk
Does the idea of parenting a stranger’s kids’ behavior make you feel a little uneasy? If so, there’s a way to do it gently and effectively: with your “inner playground monitor” muscle. Be really brief, be calm, and be firm but kind.

Before you say anything, assess the situation. A calm, alert brain learns better than a stressed one, so if any kids are hysterical or steaming mad, your words will be wasted. First attend to anyone expelling bodily fluids like tears or blood, vomit, and bathroom functions (just don’t touch it if it’s wet and not yours); behavior comes second after injuries.

Do a quick scan of each child involved, including the stranger(s.) What’s each kid’s emotional vibe? Are you personally feeling calm? How quickly are events unfolding? Depending on how you answer, some scenarios are better to let go of or let someone else handle, and then you can address what happened with your own child.

“Drive by” behavior coaching is not name calling, power plays, or issuing consequences.

While this post was intended to share what I’ve learned about communicating water safety to kids I don’t know, the effects reach deeper than that. I mentioned the toddler pancake stack at the bottom of the slides, right? “Wait until the person is out of the way.” Basic slide etiquette, in the water or at a dry playground. (Also, “wait” might have been just as effective, if not more.) Behavior coaching helps kids assimilate into their communities by teaching them expected behaviors.

Children who learn to regulate their behavior experience greater success in life, in relationships, and in careers. Historically, children learned appropriate behaviors from their “village.” Our evolution away from the village and into more isolated spaces, though, means many kids miss receiving behavioral instruction or have fewer role models in this department. As social animals, human health and well-being depend on our connections with others and our sense of belonging; expected behaviors are the widely-held norms behind it all.

Let me know if you try “parenting” a kid you don’t know with behavior coaching!

This site uses Akismet to reduce spam. Learn how your comment data is processed.